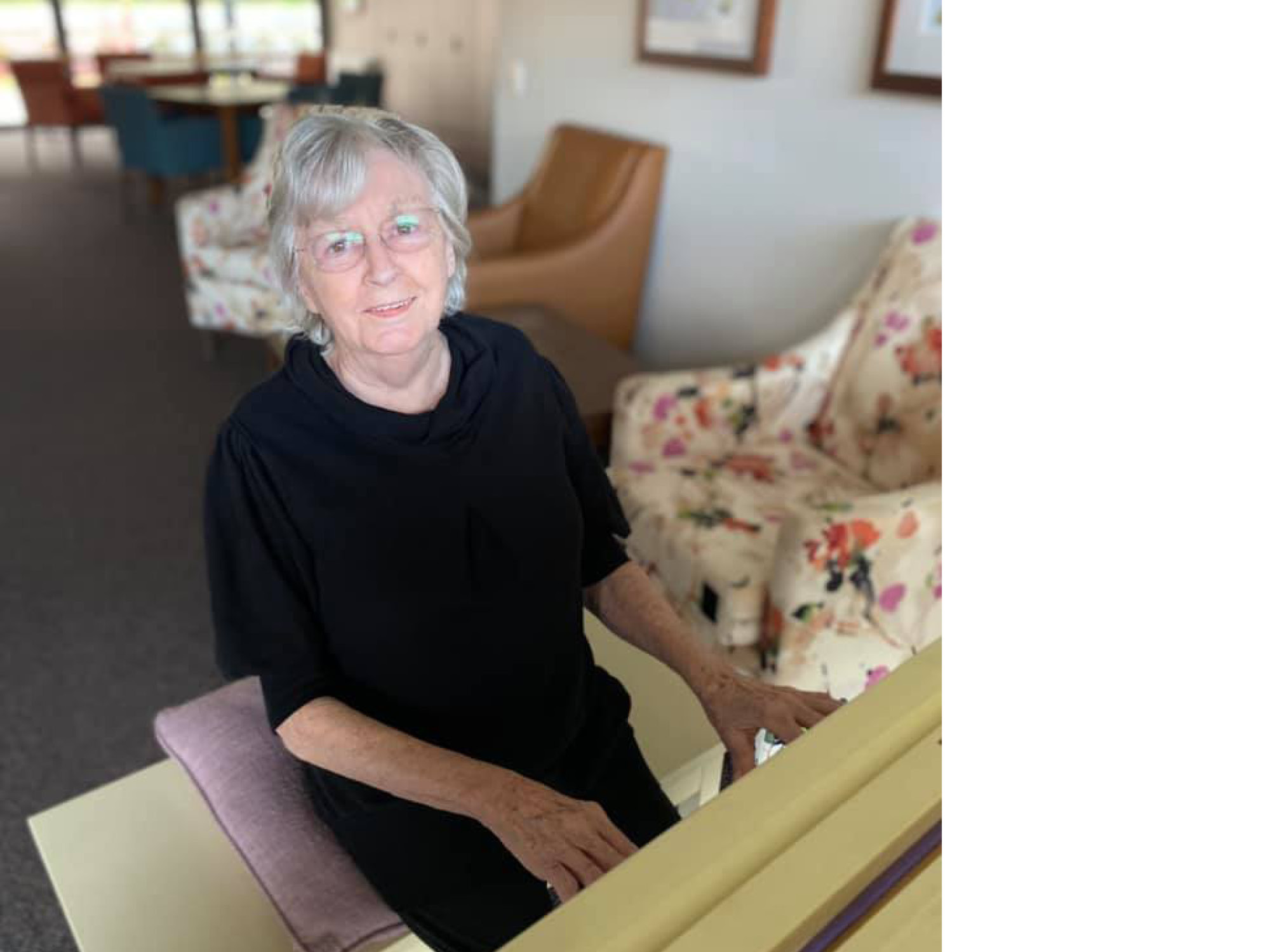 World Music Day is about coming together to celebrate the world of music and the joy and peace it brings to lives.  At Holmwood Aged Care residents thoroughly enjoy regular music events and benefit from the happiness that music brings every day.

Gloria became a resident in August 2019 and since then has shared her wonderful musical talent with the Holmwood community. Today we share Gloria’s story and what music means to her.

Gloria enjoys listening to music all day. When she is not participating in activities, she can often be found sitting in the living room listening to music. Since coming to Holmwood, staff have introduced her to YouTube, and she now loves being able to listen to any kind of music at any time.

While classical music is a favourite, her tastes are diverse and she will happily listen to and sing along with any tunes she knows from the 1930s, 40s, 50s, 60s and beyond.

Tell us a bit about your musical background

Gloria began to play the piano at about the age of six and her love of playing endures 80 years later.

‘I first played an organ,’ says Gloria, ‘I started by copying my mother and learning by ear before starting lessons’.

Gloria’s niece, Nicole, says she remembers her aunt playing the piano up to six hours a day and performing in front of audiences too.

When Gloria stopped performing, she began to share her talent, knowledge, and passion through teaching where she found so much enjoyment.

What does music mean to you and how does it make you feel?

‘Music relaxes me,’ says Gloria. ‘It’s such a big part of my life and when I was considering which aged care home was right for me, a big priority was that my grand piano could also come too. I was lucky that Holmwood Aged Care was able to accommodate me and my piano.’

Gloria’s piano now has pride of place in one of the sitting rooms for Gloria to use when she likes.

According to Nicole, music means everything to her aunt. ‘Music transports her, being such a universal language, it connects her to the world and helps her escape from it as well, and it is just something that she loves to share. Gloria just loves to perform.’

What is s special memory you have from your music days?

‘I used to perform in classical competitions which were fun and competitive, but my fondest and most special memories were when I played the piano with my mother,’ said Gloria. ‘I was nowhere near as good as I once was; I wish I was, I should try and play more’.

One of Gloria’s favourite classical composers is Chopin, and his music is often played for her during musical afternoons.

How do you think music has changed our society and the world we live in?

‘Music itself has changed. I think some of the modern stuff is rubbish’, says Gloria. ‘Music is the way it impacts us and changes our moods – we don’t even know it is happening to us most of the time. I love classical music, but that’s not for everybody and music today isn’t for me, but that’s the way it always is, isn’t it?

‘Music represents the time we are in, and we look back, and when you hear a song or a piece of music it takes you back to that time and what you were doing or going through’.

What are your top three favourite songs?

‘My top three songs, that’s a hard one’ she says. ‘I love anything by Chopin or Strauss, they’re always good. For songs though, Beethoven’s ‘Fur Elise’ and ‘Moonlight Sonata’ are both favourites.’

Nicole says that Gloria used to particularly enjoy Roy Orbison but adds that no matter what kind of music is playing, no matter the genre or artist, her aunt will always be tapping or humming along to it.